It´s just after dinner on Thursday evening, and as I´ve moved through the day here in Cusco, I´ve encountered a sense of awkwardness. Not from my surroundings, for they are truly beautiful. But, rather, from what resides within me. It is the confrontation between this journey and all that it holds, and the heartache that has traveled these thousands of miles. I hope you´ll forgive this first post of my Peru trip, and permit me to feel my way from my recent loss of Paolo to here. It feels odd to me to jump right into a travelogue, without acknowledging my heart and speaking from my central truths.
>Many of you know that just last weekend, I joined a group of friends to run the Hood to Coast Relay — a 200-mile relay race from Mt. Hood to the Oregon Coast. It took my team just over 31 hours to finish, with each of us running three legs totalling 16-18 miles each. This race occurred just one week after my loss of Paolo, and it took every bit of mustering from within to get me on that plane to Portland and in my running shoes. I was glad I did, and I´ll ask my friend RPM to forgive the redundancy as I share with all of you what I´ve already shared with her…
It just so happened that the legs that I got assigned had me running at both sunset on Friday and sunrise on Saturday. Saturday morning was my last leg, and I was in really bad shape. I had iced my quads and knees the night before after my 7-mile hill, and I was emotionally exhausted on top of the physical agony from having only 2 hours of very light sleep on Friday night. My third and final leg, which I started before sunrise on Saturday, wound through beautiful dense forest on a narrow country blacktop. I had Paolo’s bandana wrapped around my hand as David passed the timing bracelet to me at about 6:15 a.m.
There was a heavy mist falling, and my headlamp cast a bouncing, swaying beam of light through the haze as I found a stride that my body could absorb. I found myself all alone, beyond the sight of any other runners or support vehicles, embraced on both sides of the road by lush forests and the morning still. I kept my eyes focused on the asphalt beneath my feet so as to watch for trip hazards, and as my arms pumped the bright beautiful turquoise of Paolo’s bandana kept dancing into my vision.Paolo had a beautiful stride to his trot, and when he was younger and we used to run a lot I could always count on him to keep a pace that my legs found friendly. There, alone in the forest, running against the will of my legs, thanks to the flashing color of his sweet bandana and his caring spirit, I was able to find his stride as the sun broke over the horizon to backlight the overcast sky. Tears fell from my eyes, mixing with the mist, and I mouthed the words, “let’s go, Paolo.” In the center of my mind, I saw his back, his tail wagging before me, and his delicate profile glancing back to make sure I was still behind him. Saturday morning, after our first night in the beach house at Seaside (our post-race retreat), three of my team mates and I visited Cannon Beach. There were at least a half-dozen dogs running in the sand along with their owners — coats damp and darkened by the tide. There was one dog, in particular, that had a swagger similar to Paolo’s, and it made me think about how much I wished I could have somehow taken Paolo to the shore for him to play. He would have loved it.
My friends (all knowing what I’m going through) seemed to sense my need for space and allowed me to separate from them and walk into the surf alone. I stood facing the beautiful breaking waves, listening to their song, and missing Paolo. A wave of grief passed through me, and my eyes clouded with tears for him as my throat filled with heartache. I spent at least 15 minutes standing there, tossing sand with my toes, and letting the cool Pacific water nurture my aching feet. I stood there wishing. Wishing I had taken Paolo to the shore…

On Monday morning, I walked down to the beach of our rental house to take some parting photos before heading to the airport to come home. I was there all alone. Not another soul in sight. I shared the beach only with some seagulls and pelicans. As I turned back toward the trail leading to the house, walking on the wet packed sand left behind the high tide, a tiny feather followed me. The wind was blowing it along my side, causing it to summersault end-over-end in cartwheels. I stopped and watched it for a minute, and then it finally just stopped within 6 feet of me. It was as though that feather had run to catch up with me, and then took a seat waiting for my next move. It was so beautiful, and I wondered as I stared at that tiny feather if it wasn’t Paolo coming to play with me on the shore. My heart believes very deeply that it was.

I had a very quick turn-around time in Denver after returning from Portland. I landed in Denver on Monday evening, and had about 8 hours of the day on Tuesday before catching my flight to Peru. The first thing I needed to do was to pick up Paolo´s ashes. It was a heart-wrenching experience to return to the vet, and see the door to the room where we said goodbye. The receptionist carried the tin holding his ashes with great reverence, and handed it to me with care and love. My grief again spilled over, as I felt the heaviness of his remains. It was a sensation I cannot begin to describe. The finality of holding his ashes brought all of my pain back to the center of my chest. I miss him so… I believe Paolo knew he was leaving me, and he chose to leave before this trip. I believe he knew I would not have been able to take losing him while away from home; and I believe he knew I would need that time away to begin to heal from his loss. As I made my final plans to travel, I entrusted my journey to his better judgment.
………. The tiny face popped into view under my arm. “Hola!” Her face was a little dirtyñ just enough to cause her eyes and smile to slash up at me. “Hola nina! Coma sta?” “Bien!” Her voice high and lively. First impressions are everything. And after a two-day journey to arrive in Cusco, I have been in need of a pleasantry of at least her scale.

Cusco is a lovely city surrounded by modest hills that backdrop the city in green against ancient arches. The flight was so pretty…passing over barren mountains dusted with snow that looked like confectioner´s sugar atop giant mounds of cocoa. It is just now turning spring, and the days are mild though the sun is scorching at nearly 11,000 feet.

Edwin, the local contact for the charity I´m volunteering with (http://www.peruvianhearts.org/) met me at the airport and brought me to my hotel where I¨ll be staying the next few nights. The hostal sits on the main square. I chose to spend the day aclimating and getting a little lost in the stone streets. While Cusco is charming and beautiful, it is certainly heavily influenced by the tourist trade. This translates into a level of predictability that is always a bit disappointing to encounter, but nevertheless a reality of to which I have become accustomed. I have come to realize that authenticity can be evasive, and as such requires more effort to discover than simple passive observation allows. That said, I was willing to concede to observation on my first day, and I¨m glad I did.

Sitting in the main square leaves you vulnerable to street peddlers. The first one to find me was a young finger-puppet swindler. She walked right up to me already talking and telling me how I as going to buy some of her fingerpuppets. She plopped down, and in perfect English began to rattle off the names of the puppets and, when appropriate, add a little story about its particular mystique. I now own three.

This transaction clearly marked me among the street vendors, and within 10 minutes I had inadvertantly given away my pen to a young boy who simply walked up and asked for it. I was so taken off guard by his request, I just handed it to him. He smiled, said “gracias” like I´m sure his mother encouraged him to do, and walked away. A lesson here, I suppose, in asking for what you want in life with unwaivering expectancy. If it works with a pen, I´m sure it works in grander ways. 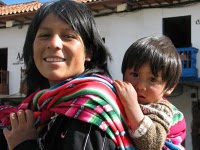 Then came the pretty young woman with a baby on her back selling woven bags. I kindly declined, to which she responded “porque no!?” (why not?) — I told you, I had been marked. So she began to show off her knowledge of U.S. capitals starting with Denver (after learning of my home) and continuing on with Texax and California. I had to help her a bit with Washington, but I completely stumped her with Kansas.

Then came the shoeshine boys teasing and smiling at themselves in the mirrors of my sunglasses while coveting my watch. And even as I left the plaza and took a stroll, the stench of commerce seemed to stick with me as I passed a beautiful old woman hand weaving belts and bracelets. She beckoned me from across the street in a way I could not ignore. I plopped down on my bottom next to her, and listened to her tell me things in Spanish that I could not understand. I stayed there with her for awhile, in the shade and on the hard stone path. As I sat there with her, I felt nurtured by the rhythm of her weaving, and consoled by the music in her words. Peace comes from the most unusual places, I have come to learn. I wish I was better at summoning them, but am grateful for when they find me despite my sometimes obliviousness. Tomorrow night I´ll depart by train to Aguas Calientes where I`ll spend the night before catching the sunrise train to Machu Picchu. I´ll then spend most of Saturday exploring the ruins, before returning to Cusco Saturday night. On Sunday, Edwin will take me to his farm and inn in Urumbamba, which will serve as my base for next week while I volunteer. I´m transitioning slowly….from Colorado to Peru, and into the stark and subtle new realities of my life. Oddly enough, in between the emotions, I land squarely within a sense of gratitude. Gratitude for this time. For this place. For this single fleeting moment introducing the next and the next and a starry sky`s worth more. Most of all, gratitude – despite, and even because of, its strains – for this life; and the contrasts that keep me absolutely aware that I am even here at all. More after Machu Picchu… Love
p