It’s 6:30 a.m. Wednesday morning in Urumbamba, and I’m telepathically doing battle with the rooster outside my window.  When I fantasized about my night in the countryside, I conveniently left out the part about the rooster.

I arrived in Cusco Monday morning in a state of shear exhaustion after my flight delay out of Houston ruined my plans for a night’s sleep in Lima.  Long story short, I did not sleep from 4 a.m. Sunday morning until Monday at about 7 p.m.  Couple that with travel grime, insufficient quality food and a 6,000 ascent above my home altitude, and I couldn’t ask much of my first day in Cusco except for a bed.

I did have a late lunch with Edwin Monday afternoon.  It has become Edwin’s custom to greet me with “Welcome Home.”  It’s such a warm greeting, and it is true that each passing moment spent on Peruvian soil seems to further baptize me as a newfound son.

After 12 solid hours of sleep, I was able to enter Tuesday a little more ambitiously.  I wanted to go to Anta!  Edwin would pick me up at 3 p.m. to see the girls.  I spent the earlier part of the day walking around Cusco and stopped for awhile on the steps of the Cathedral to watch a demonstration being held by villagers whose land has been exploited for natural gas but without any financial benefits coming to the village.  It was a civil gathering, and as I listened to the speakers make their pleas I noticed how similar was the inflection of their voices as those everywhere when describing strife and pain.  It occurred to me that, the world over, our cries all sound the same.

Edwin arrived to pick me up later in the afternoon.  I carried with me my two large duffel bags full of clothes and gifts.  Our trip to Anta seemed to be short, and we made it to the Hogar gates just before four o’clock.

I passed through the small door to try to get the gate open for Edwin to pass.  But here they came…

I don’t know what makes me happier, the sound of their voices, the sight of their smiles, the smell of their hair, or the grasping of my hands in theirs.  I’m glad I don’t have to choose.

I was introduced to the four new girls who have been placed in the Hogar because their families lost everything from the flooding and mudslides earlier this year.  They were each a little bashful, but seemed to ultimately take the other girls’ cues that I was okay.

It’s so funny.  They are at once these darling, silly little girls, and then suddenly they become very formal with me.   As each new girl was introduced to me, her name was preceded with “nueva nina, _____.”  So, one little girl was introduced as “nueva nina, Claudia.”  And so on.  (It intimidated me a bit after mastering all of the other girls’ names to now have four more to remember.  But four is easier than 20.)  Then they marched me through the doors into the common room where there was a single table with two chairs facing in the same direction.  “Sit. Sit.”  It felt like I was being seated at a table where I was about to testify.  They even told me which direction to face.  Ok.  I’ll carry on.  As the questions came flying, I learned that my grand inquisition was to be comprised only of…

“How long will you stay?”

“Will you stay here in Anta with us tonight? Please?”

“How many days will you be here?”

“What is your profession?”

“Do you have children?”

I shared with them the funny occasion of Tania emailing me and calling me “Papá Patrick.”  When I copied her email and pasted the text into the online translator, the accent was removed from the last “a” in papá.  This made me “Potato Patrick.”  I really like tater tots, so I can live with that.

The computer room that was set up after my last visit is a great success.  The girls receive regular instruction on the computers and their other school subjects.  (I’m still on the look-out for software programs in Spanish that could help the girls with their English.  Kinda like a Rosetta Stone for children.  Would welcome anyone’s thoughts or knowledge on this.)

They led me to the back of the property to see the progress made on the greenhouses.  We passed through the harvested corn fields, and it reminded me that it is late autumn here in Peru.  The empty stalks were now being harvested by the girls for the sweet cane near the roots.  So a few of us rested outside in the warm late autumn sun eating cane.  The greenhouses were almost fully planted with lettuce, tomatoes, beans, and other vegetables.  It’s clear they will become an important source of food for the Hogar, as the greenhouses are very large and all of the plants are thriving under the loving cultivation of their caretaker. 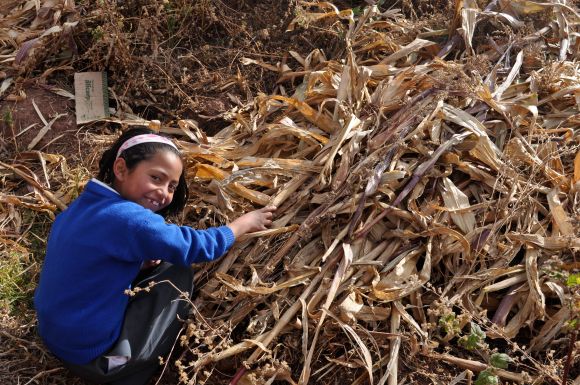 Sister Ana Yolanda came back to the greenhouses to greet us.  Upon seeing me, she said something that included the word “groso.”  Okay, now, Sister Ana Yolanda.  I may not be fluent, but I know a word or two.  Edwin translated “She said you look very good.  Very big.  Too much chicken.”  Hmm.  Well, I’m carrying a few kilos more than in November – but “groso”?  Really?  Then I heard it AGAIN from the girls.  What’s going on here?  So I asked Edwin, “Are they saying I’m fat?”

Oh, well, okay.  I subscribe.  From now on, if any of my friends notice that I’m packing a little too much weight, I would prefer that you tell me I appear to be getting “too powerful.”  It sits much better.  Wouldn’t you agree?

We went back inside where we opened up the bags of gifts.  Sister Ana Yolanda took a little tighter control of the clothing distribution and focused the girls’ attention on the other items.  The biggest hit, far and away, were the beautiful flowers and butterflies that my friends Chris and Angel made for the girls to wear in their hair.  Trying to control the distribution of those was a much more difficult task.  A few of the girls had four or five pieces in their hair.  And one by one, little hands led me to posing stations for their glamour shots.

Before we left, Sister Ana Yolanda asked if I could come back and stay and help with some things at the Hogar.  We also made plans to rent a bus to take the girls to Urumbamba on Sunday, and then carry on to Ollantaytambo for a big annual festival.

Today, Edwin and I will go to Lamay to check on the progress of a project to build a new kitchen to feed the schoolchildren there.  We were planning to stay the night in Pampallacta, but the residents celebrated the anniversary of their village and the schools have been let out for holiday.  So instead we will dedicate the day to sorting out the project in Lamay, and in the morning we’ll head to Patacancha to meet a group that is working on a weaving center with a women’s co-op there.  Our night in Pampallacta may have to wait until next week.

The rooster has quieted.  Now the birds are singing.  They’ve started the music downstairs.  I can hear dishes rattling, and dogs yawning.  And the sun is peering through the morning clouds of the Andes.  And again I hear it. 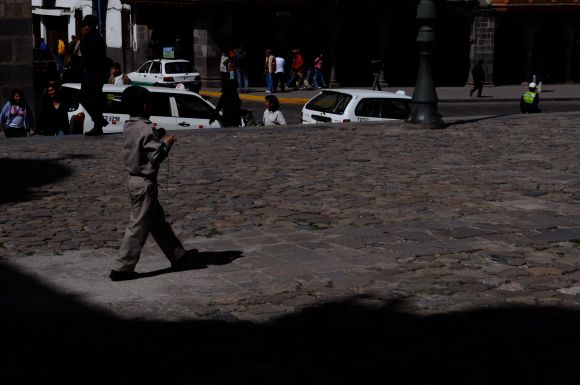 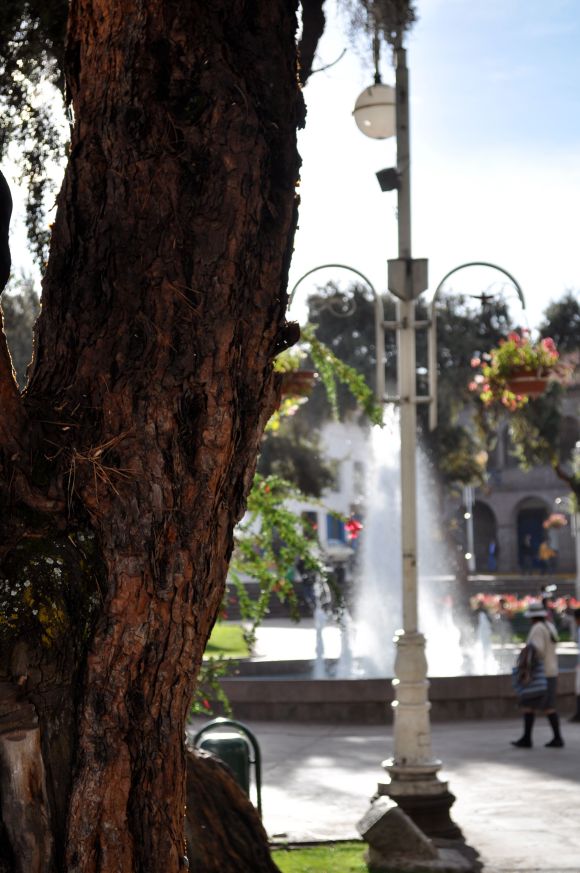 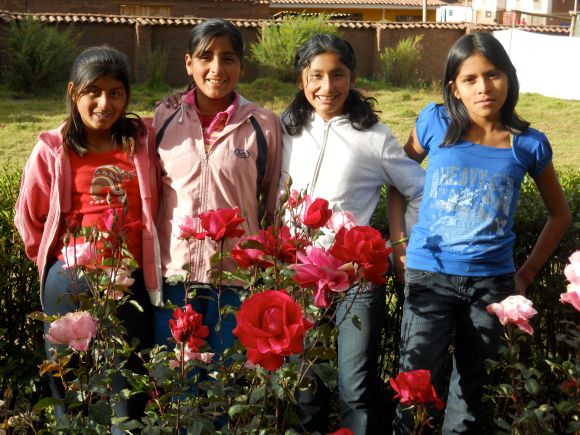 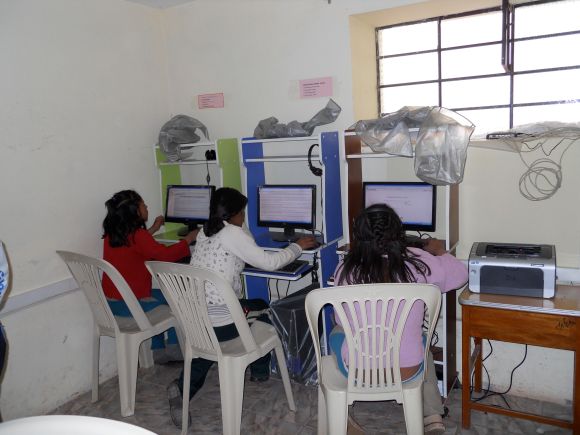 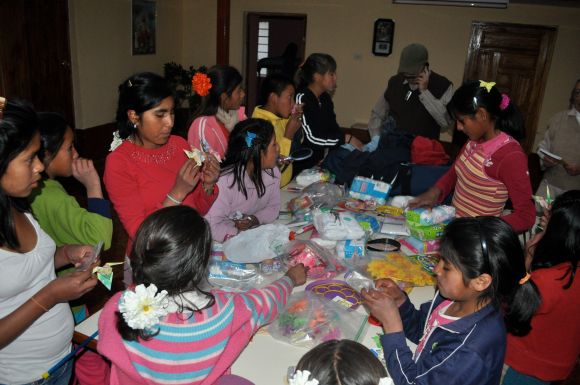 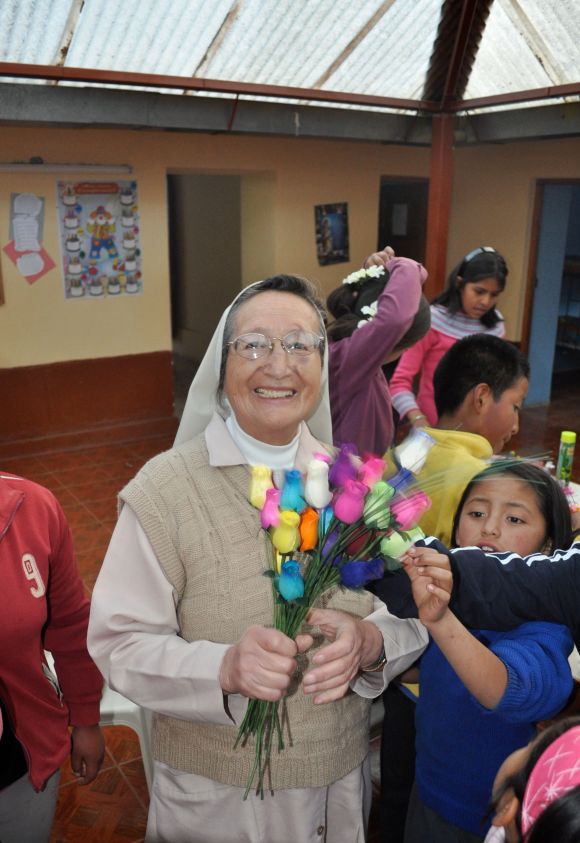 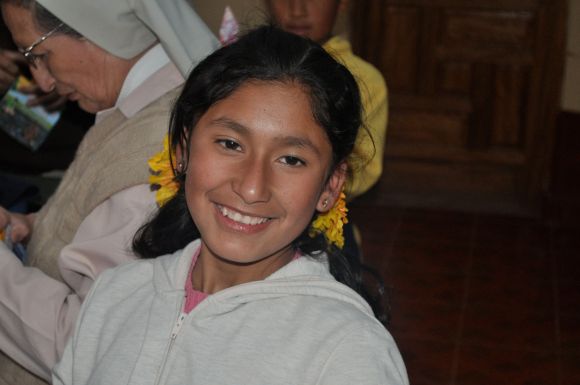 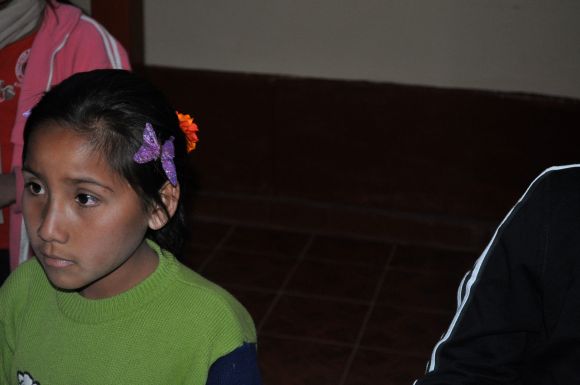