I’ve made my shopping list. It’s an abbreviated version of what is in my large backpack, which is somewhere other than where I am.  T-shirts, pants, shorts, sandals, antibiotics, insect repellant, socks…  It’s a pretty easy shopping list, since my valuables were all with me during my journey. But shopping is not exactly how I planned to spend my first day in Bangkok.

Of course, neither was sleeping.

But between the flight delays, sprints through airports, delayed arrival into Bangkok, claim process for missing luggage, and the weighty air of the city, my energy was all gone.  I got to sleep at about 4 a.m., woke up at 9 a.m. with an idea to go explore before it got too hot, convinced myself I should relax for another 30 minutes, and then work up again at 9 p.m.  You can’t win an argument with your body…

Funny, but as I’ve considered it, my destination is not so much “away” as it is – in fact – somewhere considerably nearer a part of myself I’ve been missing.  Travel, for me, is an inoculation.  It is medicine.  And it has always been my most assured path to a higher, better, purer, and absolutely truer self.  The ordinary stimuli and pre-programmed responses all evaporate.  Everything gets to be fresh, and new, and scary, and surprising, and unfamiliar, and lovely.  In a sense, the world – too – becomes a higher, better, purer and truer self, for me.

There is no escape happening.  It’s an arrival, and a re-acquaintance.  I never much thought of the past six months as a struggle.  As I look back on it all now, I think I found as close an approximation to “Zen & The Art of Divorce” as a person likely could.  That’s not to say there’s been no damage, or that it was at all a peaceful part of my life.  It is only to say that – as the Buddha would do – I conceded to all the damage and pain at the beginning.  When you do that, you can only lose what isn’t really yours.  What isn’t really YOU.  You never lose your marrow, your center of gravity.

Staring out the window into San Francisco Bay, I see tiny black dots on the water bobbing up and down.  Sea lions, grouped as spectators lined up to watch another plane take off.  “The 747s seem especially incapable of flying,” I imagine they converse, as the plane lines up and its thrusters explode.  “Well I’ll be damned,” I imagine they marvel, just before diving back under the surface to fetch another afternoon of a sea lion’s life.

The take-off route sets the city on the right.  I look down and see the tidy right angles and bright colors of Outer Sunset, just before it’s completely cut off by the reclining evergreen monolith of Golden Gate Park.  There’s the bridge, just through the clouds.  Now the narrow coast and spotty altocumulus as we gain altitude.  The land turns from terrain to horizon, and finally disappears below the cloud cover.  It’s gone.  And we break out only into blue.

“Can I bring you something to drink?”

“Just some tea. Thank you.”

By the time I arrived in Bangkok, my body was in revolt and demanding sleep.  It was the wrong time to discover my bag was missing.  After a smooth ride from Seoul, and some travel advice from a girl named Grace, I was ready to get to my hotel, sleep, and explore the city in the morning.  The process of filing the paperwork to get reunited with my bag took an extra hour I hadn’t budgeted.  When the taxi took me in, I was sweating, tired, hungry and pissy.

I’ve noticed that taxi drivers in other countries tend to find American music on their radios once they take me in. This one was no different.  “Take Me Home Country Road” it was.  Followed by “Have You Ever Seen the Rain.”  I decided to call him out on this.

“Please, turn the radio to the station you like.  You don’t have to play this music for me.”

He laughed hysterically.  “Oh, no no! This old music. I like!”  Alight, I’ll accept that excuse.  But I knew that he knew that I’d found him out.

I checked on my bags one last time before entering my room.  I knew I’d likely be in the same clothes the next day, so I immediately took off my clothes and folded them so they could appear as “fresh” as possible in the morning.  If only this same sense had better prepared me by packing a change of clothes in my carry-on.

After my 17 hours of sleep, I took a shower and went down to make another call about my bag.  Still no word.

I strolled down the street for a bit, just to get my bearings.  My body was still a little tired and shaky, so I found a place to have some dinner.  I’ve come to notice that in Asian countries it’s common practice to have a small shrine displayed in businesses.  In this case, it was a small Buddhist shrine just above the cash register.  I’ve seen Hindu shrines as well.  I like that.  I like the care and spirit of a proud business owner preparing a special place to attract good energy and good fortune.  I like the intersection of faith, belief and trust with someone who just wants to serve a good meal to a stranger so they can take care of their family.  It somehow bares part of their soul for all to see.  There’s something calming about it, and innocent. 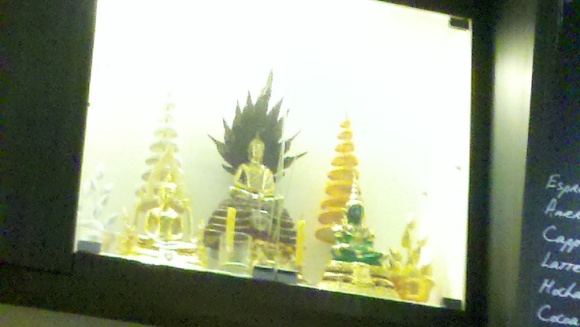 Between my hotel and the restaurant was a small massage studio with three ladies sitting outside.  Immediately the word “FOOT” stood out.  I knew I wasn’t ready to go back to bed even though it was late, so I thought a foot massage would be a good in-between.  In my travels in Asia, I’ve come to know this as an amazing small indulgence – along with getting my head shaved (in India).  My foot masseuse was a tiny woman with strong hands and an assertive word or two offered every time she moved from one part of me to the next.  As my feet were soaking in warm water, she rubbed my neck.

Moving on to my shoulders.

Across my arms, then my lower back.

“Still all hard! What wrong you so tight?”

I blamed it on the long flight.

“Ok, go sit. Relax,” she barked.  “You need more than foot. Tomorrow you come back to fix the rest.”

Then for an hour we chatted as she soothed my weary soles.  She told me the best places to travel (her hometown), the best way to get around, and asked me what Las Vegas like.  One of the other young women came inside to take a nap on one of the massage tables.  Her little girl followed her in.  I waved goodbye and said thank you to all of them, content to walk barefoot the 20 steps to my hotel.  She saw this, and followed me out.

“No! Where you go? Sit there and put on your shoe!”

“I was just walking to my hotel there.”

“But this is dirty! Better with shoe!”

Talk about pride in your work.  I actually still feel guilty from her reaction. 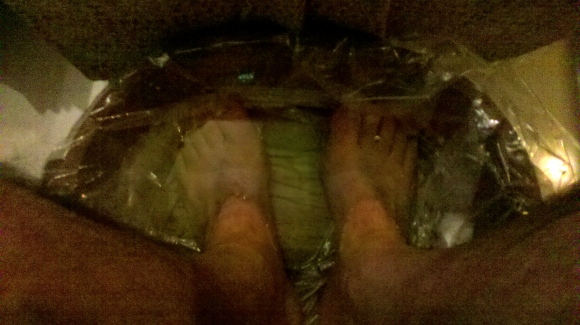 Before I closed my eyes last night, I checked my email.  There, unexpectedly, an email from my attorney’s office.  In the subject line: “Hayes Decree”.

I opened the message, and attached with the judge’s signature was the final decree.  The paralegal had written in the body of the message words of congratulations, as though I had accomplished something.  For me, it wasn’t a happy message.  Just a final one.

That email was the last thing I saw before closing my eyes and resting my head.  Soon, my dreaming mind started to re-organize and categorize things.  I tossed and turned with little hallucinations — steeped in past and present — developing in my dream world while my psyche sorted it all out.  An image of wading in a stream with my grandma, and I woke up to find my feet cold from having pushed through the blanket.  An image of a restaurant filled with people, with “Take Me Home, Country Road” on the radio.  A series of random mental wanderings, unrelated yet surely not unintended.

I woke up during a downpour, groggy and disoriented.  I got a drink of water, and laid back down.

I closed my eyes. Took in a breath.  And again, broke out into the blue.