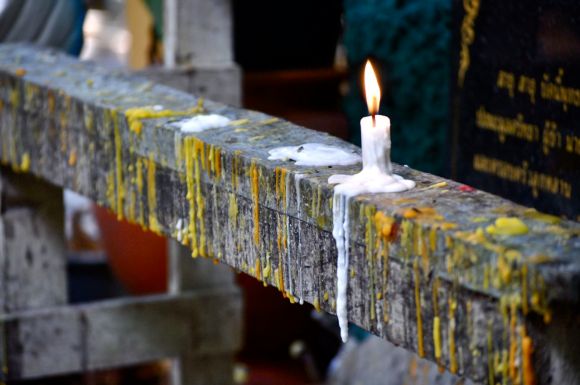 I arrived in Chiang Mai just yesterday, after wrapping up my first days in Bangkok.  It feels like most of my time in the city was spent getting rid of jet lag, which my comfortable airline seats didn’t seem to mitigate.  The last two times I crossed the Pacific, I could not have been more miserable sitting in coach.  But I can’t recall the last time I suffered with a case of jet lag like this one.

On Sunday, still in a bit of a jet lag stupor, I ventured out into Bangkok far enough to see the Grand Palace.  This was the same day that President Obama was in Bangkok, and he was at the Grand Palace right before I got there.  The palace was very crowded, with both tourists and those who I’m sure showed up to see Obama.  His appearance created a bottleneck of visitors, so by the time I got through the gates it was bedlam.

As the photos show, the palace is a truly remarkable creation.  Having never even seen a picture of it, I wasn’t quite prepared for how stunning it was.  I was tempted to just put my camera back in my satchel for fear that no photo could ever possibly capture the magnificent detail and elegant artistry of the structures and grounds.  And though a few of my photos turned out nice, they are still completely inadequate representations of what was a visual smorgasbord of colors and patterns, reflections and shadows, lines and bends and sparkles and beams of light that seemed to carve out empty spaces in the sky to occupy and settle.  It’s amazing to me how – when tasked with building moments of faith – man is capable of ascending to the highest conceivable arcs of labor and artistry.  Yet all too often, acts inspired by faith can be terribly destructive, divisive and downright poisonous.  I cannot reconcile those two truths, and I don’t know how any person of faith can either.

I strolled along the river back to my hotel, and stopped at a travel agent to make my arrangements to travel to Chiang Mai. With one more day left in Bangkok, I decided to purchase a tour for the following day to the Damnoen Saduak Floating Market and Tiger Temple.  I really have not learned my lesson about organized tours yet.  Both destinations proved to be rather disappointing, but not nearly as disappointing as spending roughly eight hours just in transit from one spot to another.  Apparently the floating market is much more to behold first thing in the morning (before the tour vans show up), when it’s an authentic floating market for locals.  Once the tour vans show up, it’s just one boat after another of jungle hats, camera straps and polarizing lenses.  The Tiger Temple was of particular disappointment, and frankly a site that I found to fly in the face of Buddhist teachings about our animal “brothers” and the importance of showing love and compassion to all living creatures.  I hate to be judgmental, but the site seemed to be more of a crude petting zoo with a temple thrown than a site of reverence and peace.

When I arrived in Chiang Mai yesterday morning, I was counting on a cool off from Bangkok’s stifling climate, but it’s hotter than hell here too, with fewer tall buildings to block out the sun that is now 1,000 feet closer.  My hotel sets at the very end of the road where the night market occurs every evening.  (A great location, right up until bedtime.)  I spent yesterday strolling around the city visiting one temple after another, each beautiful and unique in its own way.  From the air, Chiang Mai is somewhat sprawling. But the central area is quite beautiful and walkable, with lots of storefronts, hidden markets, cafes and guesthouses. 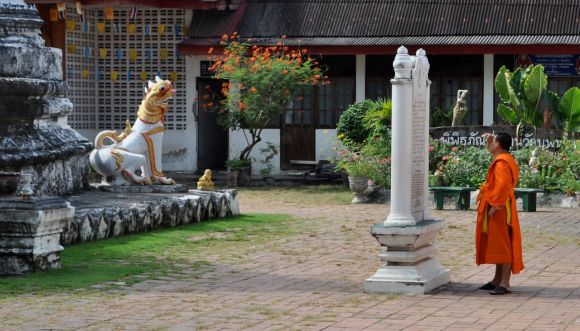 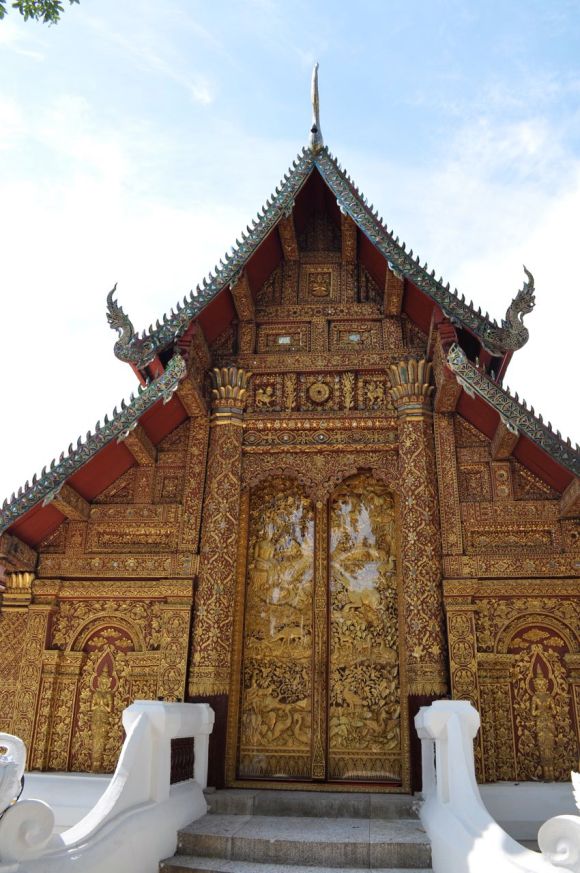 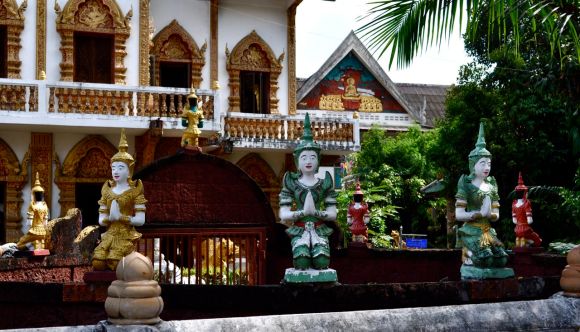 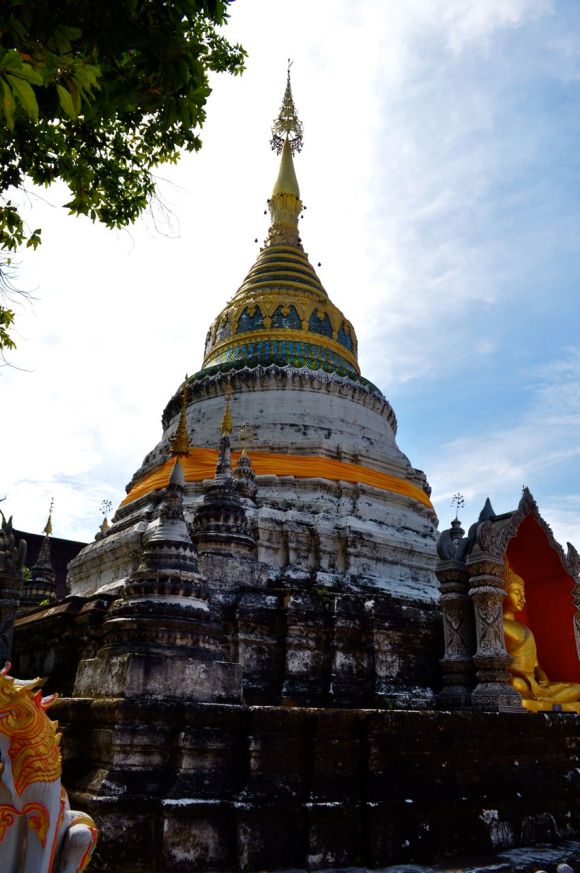 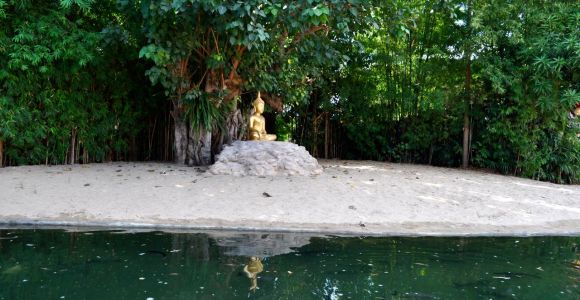 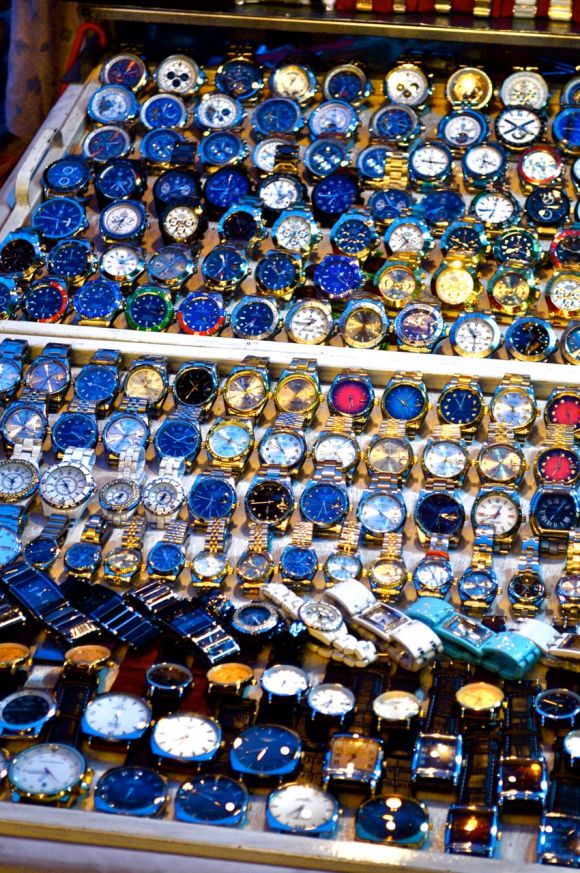 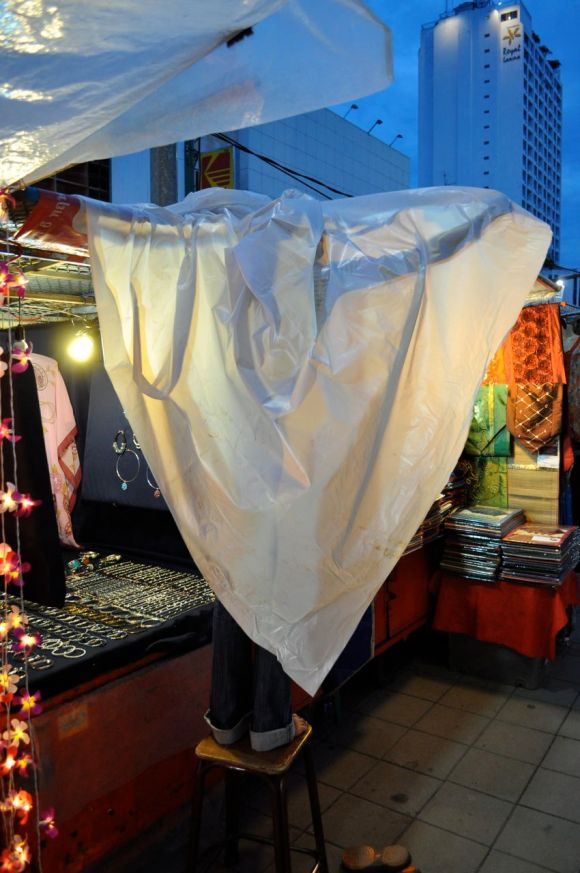 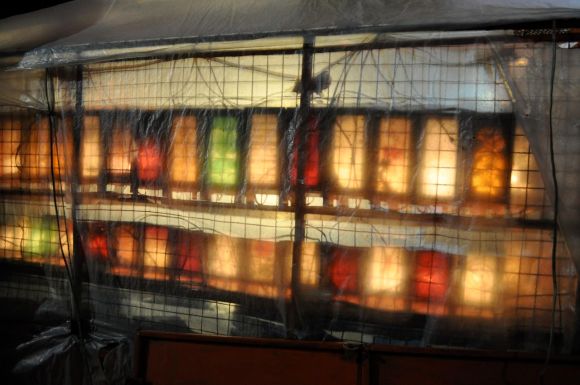 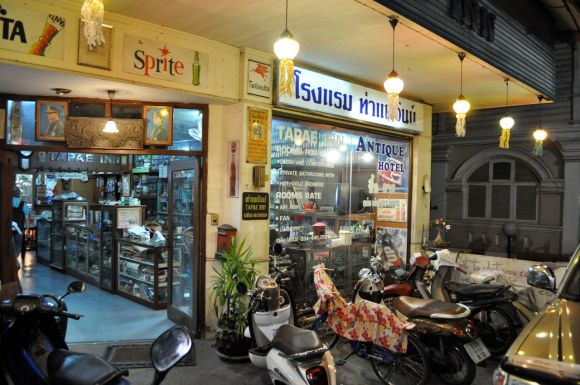 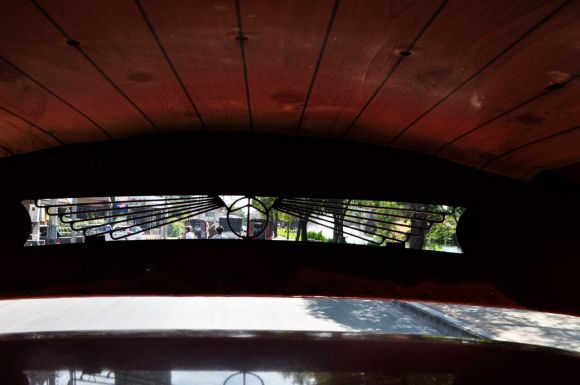 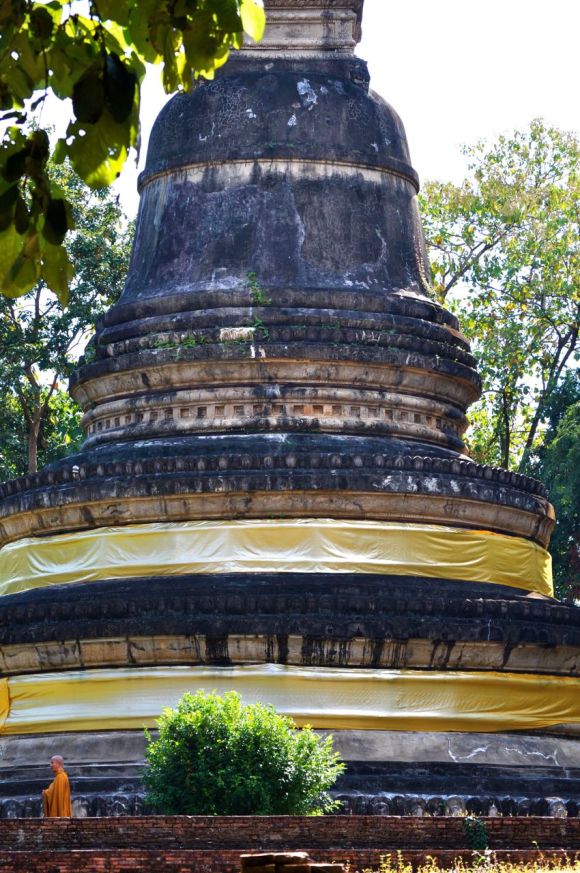 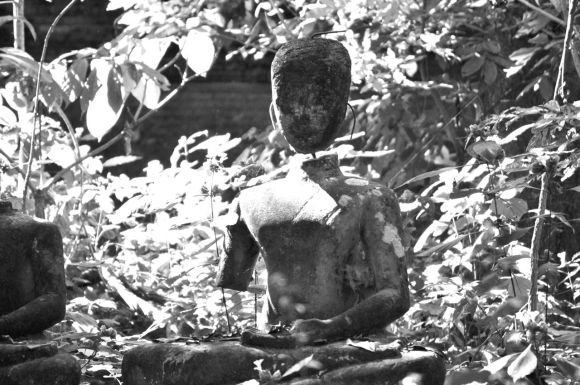 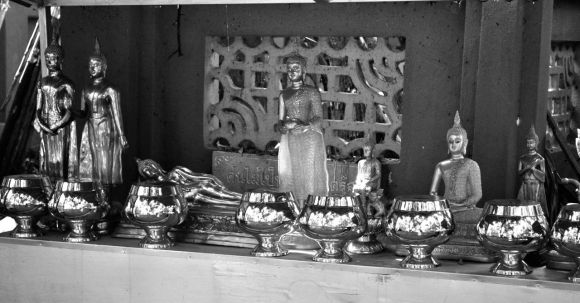 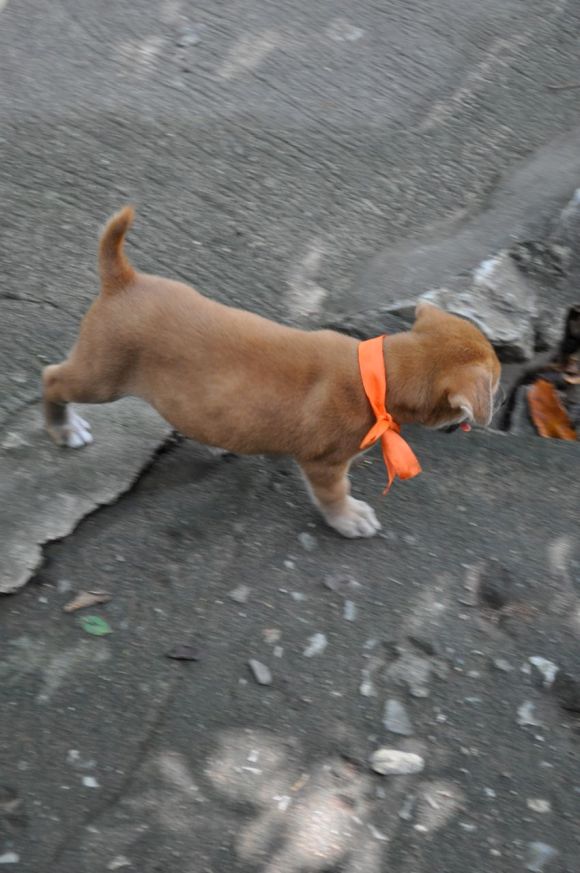 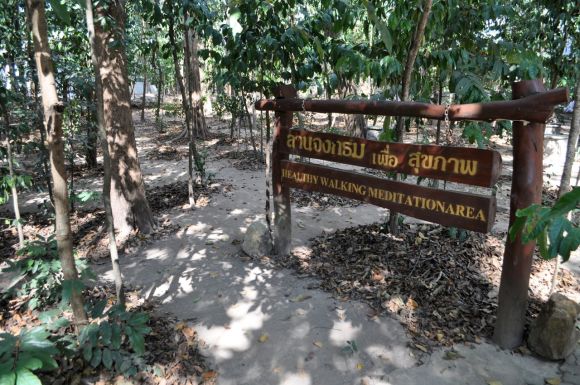 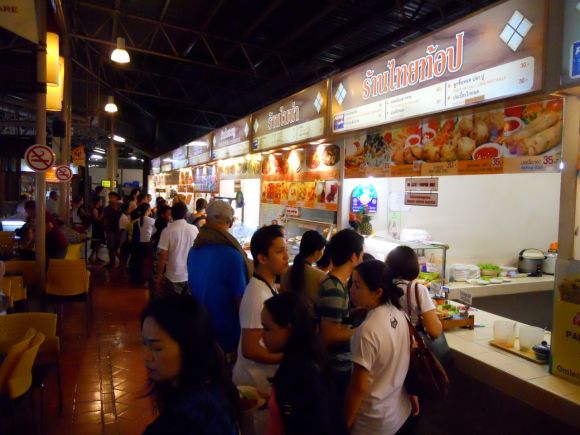 There’s a fairly significant ex-patriot population here, driven by the number of NGOs operating in northern Thailand – including American universities and non-profits.  Also among the ex-pat population are those serving on missions sponsored by faith-based organizations.  I was fortunate enough to get connected to one of these individuals by a friend who spent a month in Chiang Mai just a few years ago.

Brett and I met for dinner just off the night market street.  He and his wife have lived with their two little girls in Chiang Mai for more than four years.  Brett is a nurse by training, and works for an HIV/AIDS project, while his wife works with disabled children.  I was fascinated to hear about how Brett and his family came to Thailand, and about their journey as missionaries.  There was a great deal about the practical aspects of being a missionary that I never knew.  Though Brett was clear that there are differences between how various sponsoring churches support their respective missionaries, I gathered that in most cases those who are on a mission are largely responsible for raising the money they need to carry out their work.  The church may provide assistance with insurance and housing placement, but the task of finding sponsors rests with the missionaries.

It was through Brett that I became acquainted with Urban Light, a small organization that seeks to rescue boys from prostitution and exploitation in Chiang Mai.  The group was started just four years ago by a young woman who saw what was taking place in the “boy bars” and saw little being done about it.  Truly, in a world so stained by the horrors and injustices inflicted on little girls and women, it is not very often that someone points out that we cannot forget about boys.  The world will surely need both.

My time in Chiang Mai is not sufficient for me to have a large impact on the work of Urban Light.  But I do plan to spend some time with the warm people who are carrying out a very important mission of their own, and give what I can while I’m here.  Tonight, I attended a fund-raiser at their office and program site just down the street from my hotel.  Among Urban Light’s tools is a baking program that teaches boys how to work in a kitchen and also make baked goods to sell to local restaurants.  This helps them begin to build a responsible work ethic, and experience self-sufficiency outside of the bars and off the streets.

Anyone who would like to celebrate Thanksgiving by making a donation to Urban Light’s important work can do so on their website: http://www.urban-light.org/.  Even small donations go a long way, and can help them reach and rescue even more young boys whose futures stand to be much brighter than the dark “boy bars” of Chiang Mai.  There are few better ways to express gratitude for all of the blessings bestowed upon our lives than to extend our hearts and hands to those whose need our compassion and our love.

Tomorrow I’ll spend Thanksgiving with Brett and his family, after spending some time in the morning at Urban Light.  Then I’ll have a few more days in Chiang Mai, with the climax of my stay being the event that drew me here:  the sky lantern festival.

One thought on “Chiang Mai”