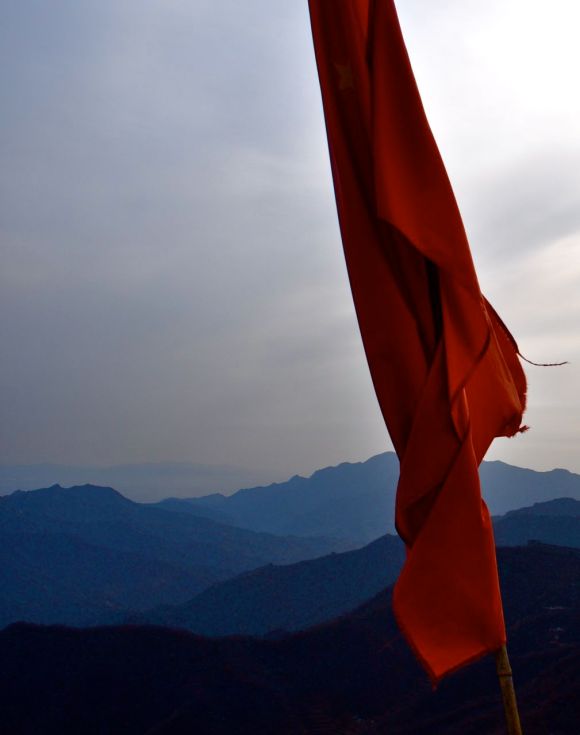 As my legs pushed me up the steep climb, and Gatehouse 10 appeared at the top of my line of sight, the stones and mortar wound and curved into infinity to my right.  The steps then aligned with the wall, following its curvature to the platform accessing the archway into the gatehouse.  I braced myself against the sides of the shallow opening, ducked through the doorway, and strolled out onto The Great Wall of China.  From that moment on, I was transfixed on my whereabouts and constantly pivoting in anxious disbelief at where my feet had carried me.

My driver picked me up at the Beijing airport at 7:30 in the morning.  She didn’t speak a word of English.  Not a word.  (Of course, my Chinese hasn’t quite progressed as I wish, but given I’ve invested no time learning it I suppose I have to accept this deficit.)  This made for a very quiet morning drive, as we rolled through the outskirts of Beijing with the sun rising through the naked forests, following streams and grazed hillsides.  I was completely exhausted and hunched over from a very uncomfortable and sleepless flight from Bangkok that had left at 1 a.m.  So I had not slept in over 24 hours and was in a haze trying to wake myself up.

Within an hour, we arrived at the bottom of the Mutianyu section of The Great Wall, one of several iconic portions along its numerous incredible expanses.  It was well below freezing, and the warmest item of clothing I wore was a long-sleeved cotton shirt.  Thank God for the early risers who were setting up their souvenir stands and seemed accustomed to people showing up ill prepared.  I was able to buy gloves, a stocking cap and a dorky pullover sweatshirt already boldly proclaiming my victory over the wall.  I had a lot to live up to.

Most visitors ride a gondola from the base up the mountain to the wall.  I decided to take the footpath and climb up.  The area had just opened, and I was one of a handful of first arrivals.  My climb up the steps was peaceful and invigorating, the frigid air in my lungs helping shock me awake. 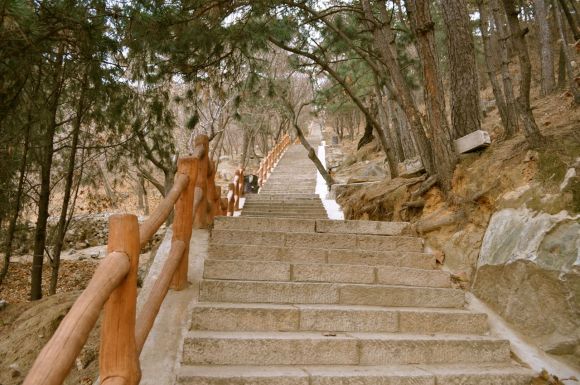 When I arrived at Gatehouse 10, I was catching my breath from the climb and gazing across one of the most spectacular scenes my eyes have ever taken in.  The wall extended seemingly endlessly in both directions.  Across the inner valley, on mountaintops, other distant gatehouses looked like tiny Monopoly houses in silhouette.  I started to walk in the direction of the gondola platform, watching the wall snake progressively higher in the distance.  It soon became clear that the “climb” in “climbing The Great Wall” is not in the steps leading to the wall.  No.  It’s the ascent of the wall, itself.  And it is one hell of a climb.  But I was so excited to be there.  Even my inner thoughts were speechless, in those moments only capable of crafting “I’m on the *&@!% Great Wall of China!”  Not very refined, I know, but I just could not believe where I was. 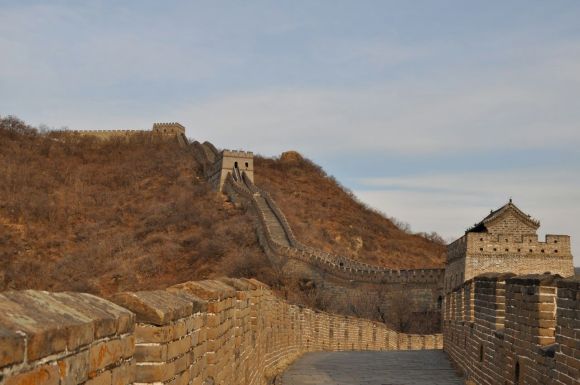 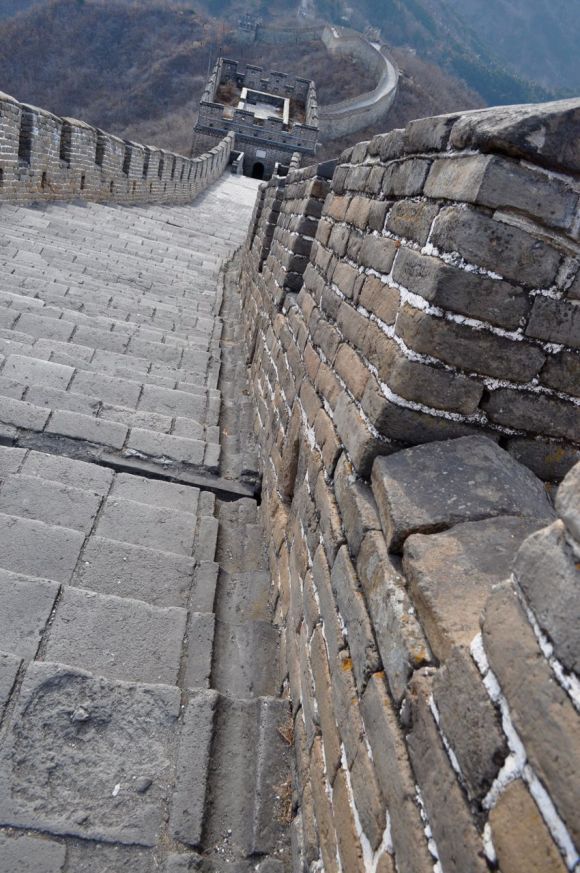 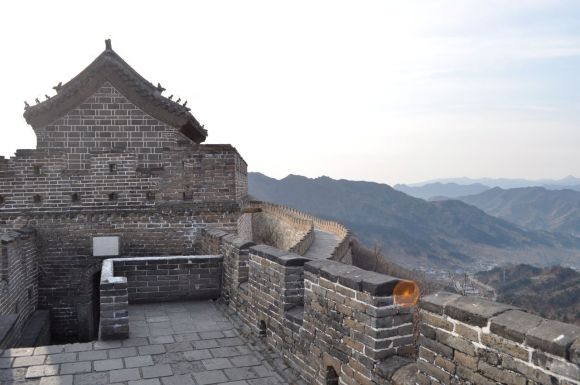 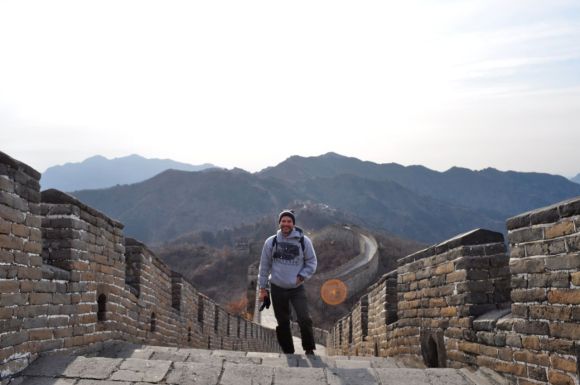 My steps were enthusiastic, and I found myself even running up several sections just to burn off some of the nervous excitement of the experience.  I don’t remember the last time I felt so much like a 10 year old boy — boundless and manic energy, anxious to explore every portal and stairway, gazing back and forth and back again trying futilty to take it all in.  And countering those juvenile vibes was a constant and more matured sense of humility and gratitude.

Continuing along the path I encountered a Chinese man who was with his son and father.  He greeted me and I felt relief at finally having someone to interact with over this amazing experience.

“Isn’t this the most amazing thing!?” I asked him.

“Yes, it certainly is. Can you imagine standing guard here in the middle of the winter? What that would be like?”

It was his third visit to the wall, but he had come today to share it with his son and father.  He asked me where I was from, and I told him I was just on a long layover in Beijing.  He insisted on taking a photo for me, and seemed genuinely excited to be part of the experience with me.  He even began to instruct me on my poses.  “Ok, now give a thumbs up.  You made it to The Great Wall!”  I obliged, and I’m certain I would have tried to stand on my head if he had suggested it.

“They say only real men can climb The Great Wall,” he said as he snapped away.  I thought to myself: “Yeah, well, I’ll get back to you on that one after I see if I can actually do it.” 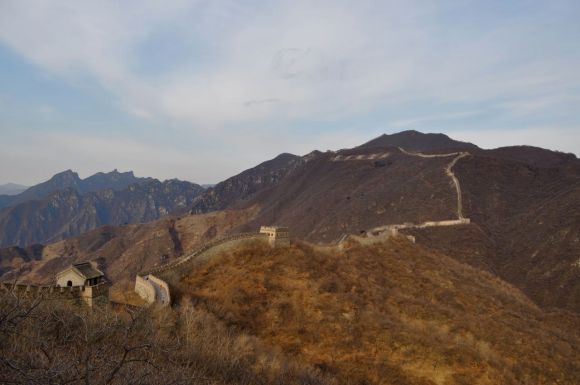 I walked on and soon met two young men from Mexico City whose faces looked like what I imagine mine did: stupefied.  They asked me to take their photo and then insisted on taking mine.  We chatted for a few minutes about what an incredible experience we were all having.  It was so special and meaningful to me to have a chance, in the midst of this somewhat random event, to share the wonder of the experience with fellow travelers who were as stunned as I was.  I will never forget the expression on their faces.  After well wishes and blessings for our respective journeys, all carried on. 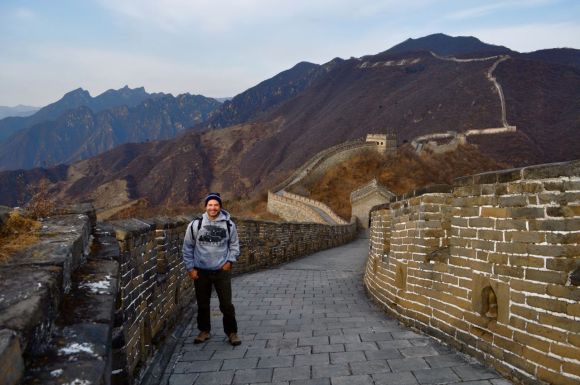 There were countless occasions when I felt like I had the wall to myself.  It was so quiet, and COLD, and overwhelming.  Even when others appeared, they would soon disappear behind the slopes of the wall creating a scene of complete solitude.  As I climbed and my legs caught fire with the intensity of the task, I found a deep peace in the purest mantra of footsteps and breaths.  There was no wind, no songbirds, no distant sounds of cars.  It was just me, my steps, and breathing. 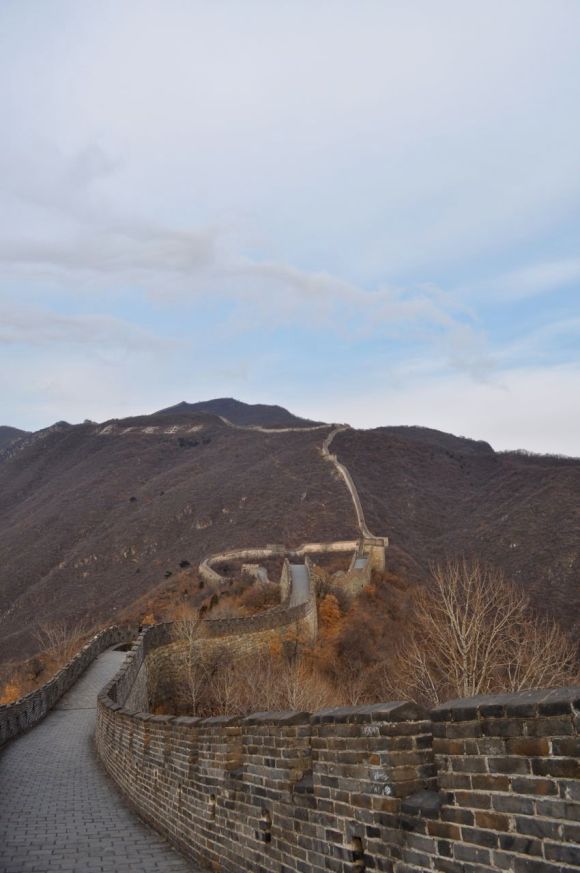 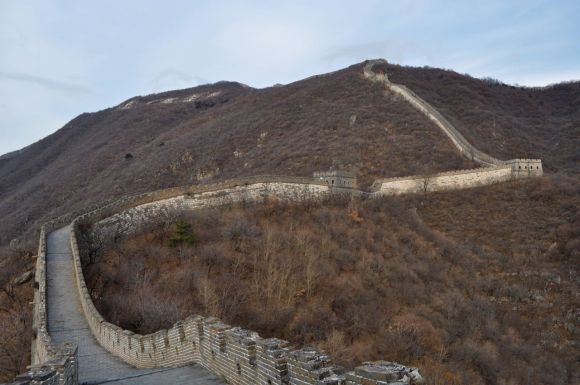 The final portion of the climb is a steep 452 steps straight up, after which the wall continues well into the distance, but that section is closed to foot traffic.  In the dim-hued winter landscape, the deep red flag of China provided the only color or movement to mark the destination atop the final gatehouse.

(Barely visible in this image, just right of center at the top of the ridgeline, is Gatehouse 23 with the red Chinese flag flying. The flag and gatehouse are clearer in the photos below.) 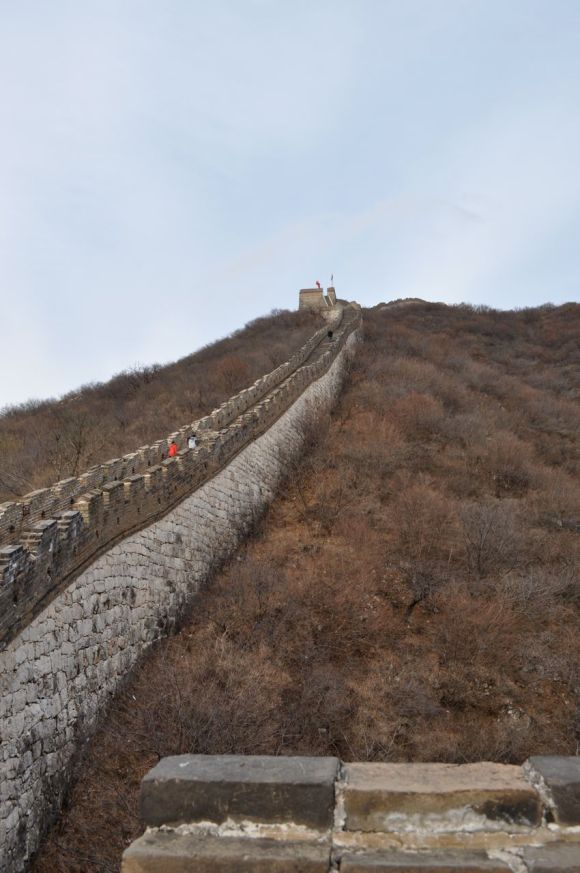 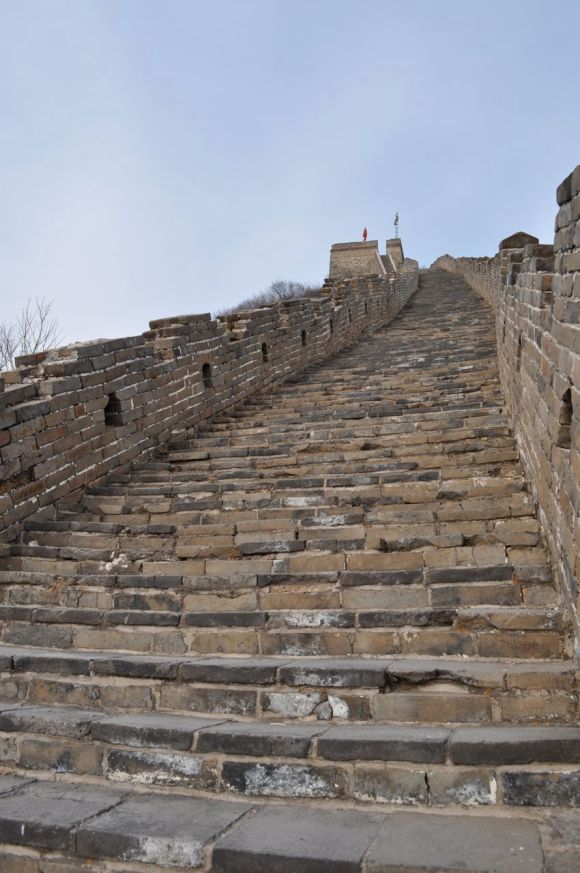 For no particular reason, I began to count off 15 steps of my left foot to pace myself, after which I would stop and take 10 deep breaths before carrying on.  I didn’t even realize I was doing this until about halfway up, and then I started to pick out specific steps as my next intermediate rest stops.  Finally, I reached the staircase to the gatehouse, and a girl stood at the top clapping for me as I landed atop Gatehouse 23. 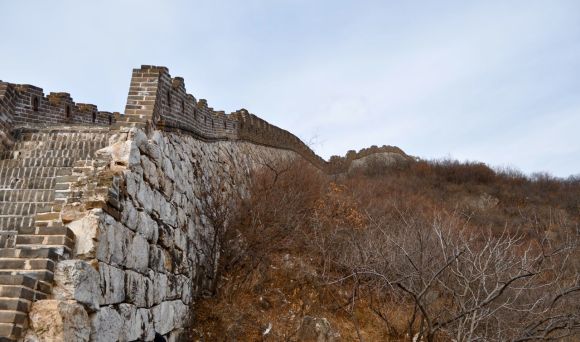 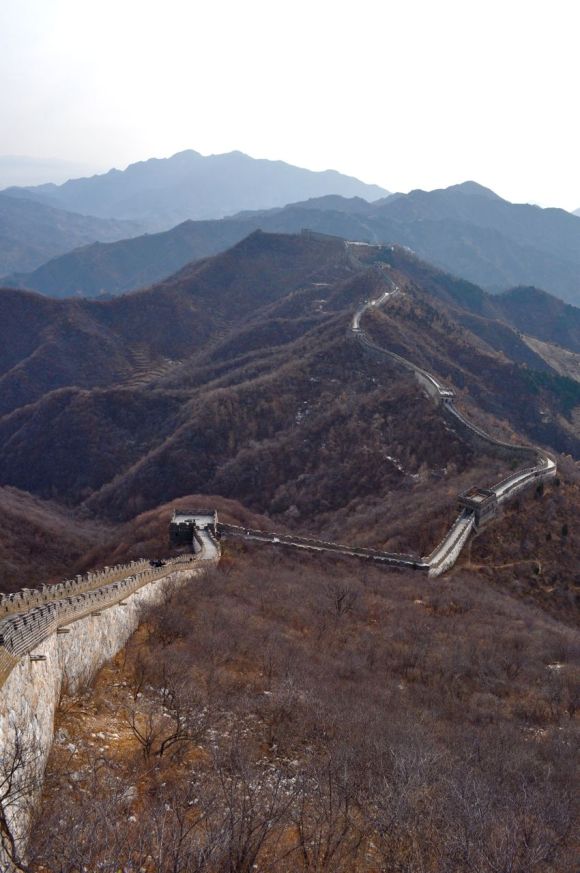 She sold me a bottle of water, and volunteered to take a couple of photos of my accomplishment.  I then had 30 minutes to get all the way back down to meet my driver if I was going to arrive at the airport on time.  There was no way I was going to make it back so quickly all on foot, so I walked back to the gondola house where I arrived just as dozens of visitors began to crowd the wall.  I felt so fortunate to have been at there so early and to experience it in the peace and quiet of a frigid early morning.

I took the gondola down to shortcut the descent and reached the bottom right on time.  I took a few minutes to buy some dried fruit and nuts for my breakfast from the market stalls at the base, and then we were on our way back.  I couldn’t help but laugh to myself at the notion of breezing into this miraculous scene on partial whim, and yet having just had one of the most profound travel experiences of my life.  It was worth the expense of the Chinese visa I had to acquire just to leave the airport for a few hours, and worth hiring the driver so I didn’t lose a single moment by trying to coordinate things at the airport.

I am so grateful to have had this experience.  I am grateful to the man with his family, and the two young men from Mexico City, and the young girl at the top for being there with me for a few shared moments of wonder.  And I am grateful for the incredible sharing tool that the internet provides so I can share chapters like this here.

We are each on our own paths; our own ascents.  But from time to time, it is so incredibly nourishing and reaffirming to just stop along the way, catch our breath for a few moments together, and talk about how amazing all of this really is.