Covering hills like rain
these relentless, lying paths
Nothing forgiven by what is gained
born to rise up — up the long way

“It was a very long journey,” he said in summation, his hands wrapped around his coffee cup and his tone weary at the memory.

“Yes. It was a long journey, and a difficult journey,” I replied.

I shifted my weight, now out of habit.

I’ve had my share of memorable journeys. I have earned my passenger stripes on some of the most gut-wrenching, uncomfortable, harrowing motorized passages a body can be asked to withstand. I am no stranger to long, seemingly endless trips across, over and through mountains, rivers, deserts, canyons, jungles, and clouds. And though I am not a particularly good traveler, I make up for it by being an especially good arriver. As soon as my feet hit the ground – as soon as the first breeze cools my face and I can smell the air of the place I have sought out – the discomfort evaporates. For good. I exhale. I arrived. Thank the merciful heavens – at last, I am here.

There simply is no turning down a trip out into the field. The opportunity to see the landscape – alone – is sufficient motivation to set an early alarm and greet the day in the dark. By now, it’s become ritual, but without losing a particle of anticipation. These days, I wish only to be in a vehicle, gazing out the window at the high feathery grasses and fractal cloudy horizons, led by the promise of one more magical introduction and blessed interaction.

Lake Kariba was created by a dam, along the Zambian-Zimbabwean border. It’s now a popular tourist destination, and home to plentiful wildlife around its shores. Kariba is the largest town in close proximity to the Nyaminyami District, where we set out to visit three of the first Kiva loan recipients among Camfed’s 1,658 alumni (CAMA). These three young women had recently repaid their $500 Kiva loans. Our task was to visit them, gather information from them on their respective businesses, and learn how – or if – the loans had an impact in their lives.

We arrived in Kariba close to midnight, and we were early to rise the next morning to gather district officials and begin our journey into the remote, rural villages where the young women lived and worked. It was 5 a.m.

This was her response to my assurance – three hours after we left Kariba – that I could wait until we arrived at our first stop to eat.

Looking at a map, the distance from Kariba to the southern part of the lake is not far at all – as the crow flies (or the boat sails). But we were going the long way, backtracking along the previous night’s route and then turning westward along roads that regressed from modestly-maintained, eroding asphalt to crumbly red clay to sloshy, rocky, steep, curvy memorials to roads that once were, but are no more. The day before, the Land Cruiser seemed like an odd choice from the vehicle pool, considering the long distance and the number of bodies it would ultimately need to accommodate. But shortly after leaving the asphalt, it was clear that it was the only vehicle capable of carrying us over the terrain.

In 1991, Camfed’s founder – Ann Cotton – was conducting field research in the schools of Nyaminyami to understand why so few girls were getting educated. Upon discovering the reasons to be largely economic, she returned home and began selling baked goods and marshaling the support of her friends and family until she was able to pay for school fees, uniforms, and books for 32 girls. This was not to be a simple field visit, but a pilgrimage of sorts to Camfed’s origin. This was Camfed’s birthplace, and these were the girls who inspired its creation.

After seven bruising hours in the back of the Land Cruiser, we finally arrived in Siyakobvu. I leapt out of the truck with a thud, a grunt, and then a smile as soon as I saw her face. It was a familiar one. The moment the sunshine crept under the shade cast by her bright white hat, I remembered Fungisai from the CAMA conference a few weeks ago. She had, without question, one of the brightest, most confident smiles. She had distinguished herself in my mind by not requiring my prompting to show life, energy and happiness in her portrait. For Fungisai, it seemed to come natural.

“Yes, Mr. Patrick,” she replied, as though it was quite obvious.

“Patrick, do you remember Fungisai?”

“Of course!” I said. “I remember her because she had one of the most beautiful smiles in the photos I took.”  And once again, we all got to see it.

Fungisai used her Kiva loan to start a clothing booth, set among other clothing booths and across from a small grocery, where roads converge in Siyakobvu. We spent time asking how her business was going, what her challenges have been, and what her plans are. She stocks her booth with clothing she buys from South Africa. Her profits have been sufficient to care for herself and her children, but she’s seen revenues rise and fall as the local farmers collect windfall earnings from their crops, and then tighten budgets until the next harvest. Like so many I’ve spoken to, Fungisai’s life has been enriched – if not transformed – by her loan. She has more work to do, and she realizes this. She wants to improve her shop, and offer more inventory to help stabilize her revenues. But still, now things are new for her. Suddenly, with her business her dreams have credibility.

I folded myself back into the Land Cruiser as we took on additional bodies for a short trip to Fungisai’s home, where we were served village chicken (“road runners” as they are called – larger, free range birds) with sadza. We washed our hands, took our plates, and had our lunch in the shade of her porch. I discovered the wishbone in one of my pieces of chicken, and removed it. I explained the idea behind the wishbone to Fungisai, and offered her the opposite branch of the bone. We had to tug and twist a bit. “Make it a good wish!” I encouraged her.

The bone finally split, with Fungisai holding the larger piece.

“I hope your wish was a really good one,” I said.

“Yes. It was,” she replied. She then carried on, collecting empty plates and food scraps in one hand, while protecting her prized wishbone in the other.

She didn’t realize she was covered either way. Because my wish was for her.

After lunch, we traveled another hour over the worst section of road we had encountered. It could have been a testing ground for monster trucks, requiring the Land Cruiser to crawl over exposed boulders, navigate collapsed concrete sections serving as bridges, and pass through large mud puddles of uncertain depth. We arrived in Mola just as the shadows were getting long, with two more loan recipients to interview. Because of the hour of day, we had to try to make quick work of these two visits in order to pass back over the rugged road before nightfall.

Bvumai was one of two early beneficiaries of Ann Cotton’s work in Nyaminyami. Orphaned at a young age, she was identified by her school as part of the community’s especially vulnerable population of little girls. Camfed’s support of her schooling ensured she was able to get her education, and now as part of the CAMA network, Bvumai’s journey with Camfed has been fully realized. She operates two successful shops thanks to her Kiva loan. She proudly presented us with her ledger, showing some of her impressive daily sales over the past several months. Bvumai continues to contribute to her community and support the education of other little girls. And she never stopped smiling (so the photos were a cinch).

Sheila, another orphan, spent an entire year as a child at home with relatives – out of school, and fate uncertain as her extended family struggled to care for her. Like Bvumai, she was identified to Camfed as in need of support, and was placed back into school. Today, in addition to operating a profitable fish trade, she’s a leader within the CAMA network and serves as a school counselor providing support and encouragement to girls in need of assistance. She operates her business with her husband – something that seems to be rare, but I was happy to hear about. Many of the married women I’ve spoken to operate their businesses independently, proudly. It was nice to hear an example of not just encouragement from a husband, but partnership as well.

Some of us were born into privilege. Many of us were not. I left the “us” in that second sentence for a reason.

We are here together, no matter our origin or our path. We share this time and space as siblings. We are only anonymous to one another by virtue of a rather unfortunate choice that too many people make. A choice to separate themselves from “the others.”  Those souls – those beautiful, bountiful others – miles and days away from our own lives, for whom scarce room is rarely made for consideration or contemplation.

What I said to the District Education Officer was heartfelt, and I believe very strongly to be true. “It’s important that we see each other’s lives. That we get into each other’s lives…”  Very simply, that is the formula for empathy, which doesn’t just happen. It is not innate. It must be nurtured, nourished and cultivated through compassion and sacrifice. Without it, we are merely shells occasionally animated in mime.

We could have taken a ferry to Mola. We could have traveled for less than two hours back to Kariba. We could have saved our backs and legs, spared two plastic bags from being filled with vomit, had dinner, and been to bed early. We could have avoided the rainy return, and the flat tire at midnight smack dab in the middle of lion country. But upon reflection, taking the quicker route would have been disingenuous to the spirit of our journey. And the easy way ultimately would have been an affront to these beautiful young women and their journeys.

I’m happy we honored them. And for all of the others, too, I would gladly again take the long way. 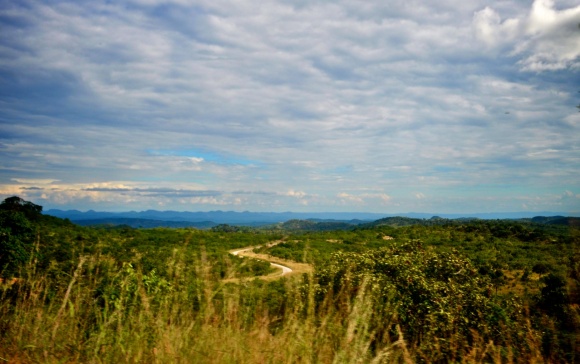